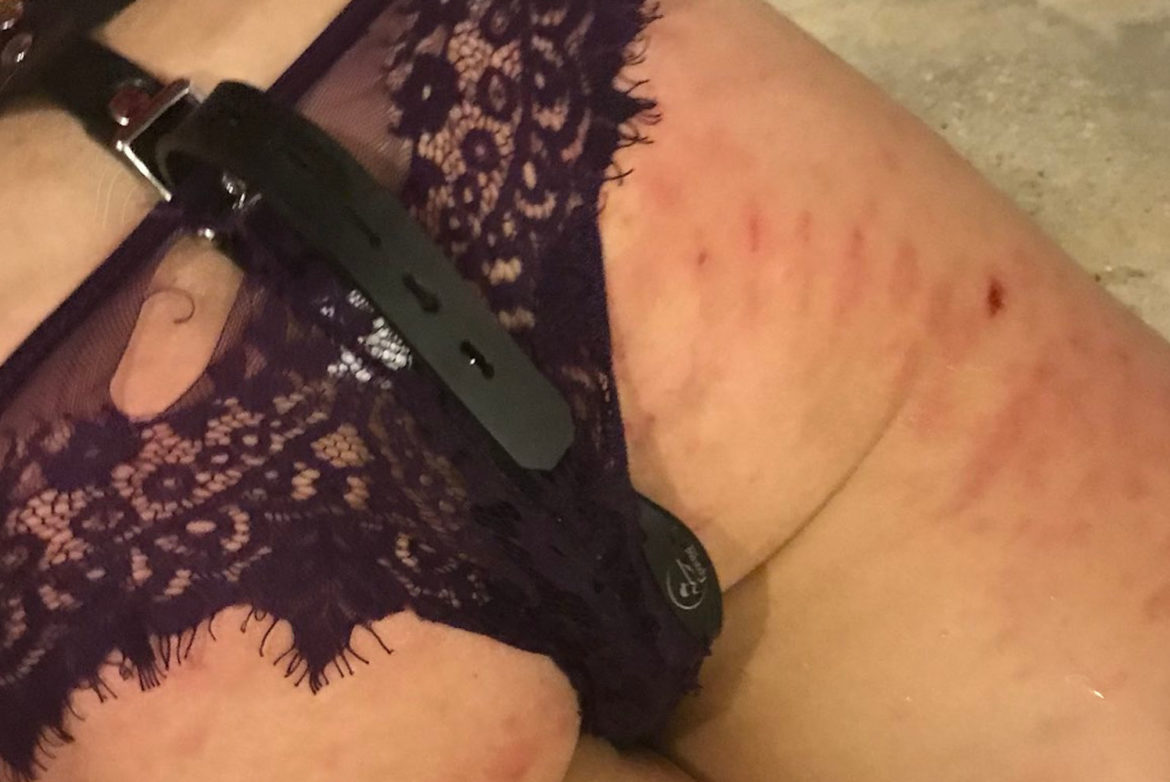 My somewhat boring evening was about to take a turn as Mistress was letting me come over. I was desperate for Her to play with me and even the thought of having nipple clamps on for hours couldn’t deter me.

The drive felt like it took hours but finally I was parked outside. I never know what to expect she’s so different. Would she just put the clamps on and send me home, driving and squirming in pain. I was dressed in sweaty riding gear, hardly what I wanted to wear for Mistress but I didn’t have any spare clothes to change into, it made it easier to take my shirt and bra off. Once upstairs Mistress handed me the clamps and told me to place them on my nipples properly. I hate nipple clamps and the strong metal contraptions that lie in my hands were no exception. I carefully clipped the small point on my nipples one at a time, trying not to flinch or react. My left is by far more sensitive and it was only seconds before that had become painful. I tried not to squirm too much and to be a good girl, I wanted to show Ms Wolf that I can take it and I’m ready for more.

One wrist at a time the cuffs were placed on my wrists and I was blindfolded. Kneeling comfortably on the bed with my ass high and hands chained down. I don’t know why it came as a surprise given our conversations that day – I had told Mistress about dreaming she cold caned me till I cried. The cane stung and on each hit I felt my ass and legs involuntarily flinch and bounce like the little rabbit I have been named. I tried to stay still but the more I tried, the tenser I became and the bigger the jump. It was obvious I wasn’t being caned hard and I could feel Her claws on my backs holding me down, trying to help me keep still and take it like a good slave but it was no use. Often on the bounces the relentless metal grips on my nipples where pulled of got caught on the bed causing an instant burst of painful torture and an immediate squeal or cry. Occasionally Mistress pulled on the chain, sending all my nerves into overdrive as the pain rushed through my breasts. An unforgiving pain that you just can’t ignore or forget. There was no pity, only the amusement in Her voice as she then continued to cane. Even when told I would be treated if I stayed still for 10 canes I could only manage two before I lost control. I don’t like disappointing Her and I wasn’t in pain, I know I can take far more, I wasn’t even close to tears. Mistress stopped caning from the frustration of my bouncing but She has kindly offered to help me through it and teach me how to stay still and take it.

My disappointment in myself dissipated as soon as I felt the doxy, I often struggle to climax after caning but I was so wet, I wanted to lick and taste Her. Although I was blinded I could feel Her, hear Her and beg Her to let me cum. My thighs became stickier as she denied me, taunting me until my begs sounded sincere. I could hear as my moans escaped and I had just as little control as when being caned, my orgasm grew and the noises got louder but the doxy wasn’t removed. I almost forgot the demonic clamps gripping my nipples. Sensitive and unable to move Mistress circled it around my clit prolonging the relief and relax. I didn’t deserve it but it felt so good and I love moaning for Her. I breathed as told and then immediate rush of pain and adrenaline as the clamps were removed finished and reduced me to a curled ball on the bed, unable to move as the blood flooded back into my nipples with a force that I thought would rip them open.

I was untied, a cute black collar placed around my neck and allowed to lie with Mistress, safely in her arms listening to Her talk. I had and still have so many questions, I love hearing about everything- kink and otherwise. She knows so much and it makes a change to be able to talk about real things. I begged Mistress to let me lick but she still insists I must wait, I don’t understand how giving pain is enough for Her but it’s not my job to understand, merely to comply and make Her happy however She deems fit. As her smile grew and eyebrow raised my nerves reawakened. I was told to stay still on the bed and not move a muscle.

Mistress returned with a big smile and large heavy looking case that looked intimidating in itself. As it was opened and plastic wrapped items were laid out next to me on the bed I started to realise what might happen. Earlier that week I gave blood, I wanted to prove to Mistress that I’m no longer afraid of needles and that I can be a slave she would want, a slave that could enjoy needle play. The alcohol was cold as she wiped my left breast preparing me like a patient. I could feel equal parts of nervous tension and excitement as I watched this beautiful women calmy unwrap the needle. I don’t know what I expected but there was no delay, my breast skin was pinched and before I could think about tensing muscles or holding my breath I was watching the needle pierce my skin. There wasn’t any pain but a strange sensation not dissimilar to being bitten gently as the cold metal disappeared in one side and reappeared the other. Sadly no blood left the skin and before I could fully digest what had happened She was piercing the next needle through, concentrating on the placement and watching as it glided under my skin. I’m not sure what was more fascinating, watching sharp metal go through my breast, how wet and desperate to please I immediately became as soon as I felt it on my skin, or watching the pleasure and concentration on Mistress’s face. She wasn’t done. The staple gun was removed from the case and I watched as She held it against my rip cage and pushed four perfectly aligned staples in leaving enough time between each for my breathing to regulate. I couldn’t believe how pretty they looked in the skin, I know it was no where particularly sensitive but I was lying still and couldn’t help but admire the artist at work knowing She was allowing me to be Her canvas.

Once happy with taking my virginity Mistress softly spoke and kindly showed me what moving the needles felt like and how the skin stretches when they’re pulled. I couldn’t help but giggle watching this stunning yet dark Mistress play with my body. It was getting late and so the needles and staples were carefully removed and I was wiped down with alcohol again. I had 12 perfect little dots on my body as a reminder for the next few days that I was a good girl and able to stay still and enjoy being Mistress’s art, that I was able to submit and let Her play with me in a way that She enjoys.

I left happy, calm and with my cute new collar excited for the next time Mistress will play with me and for all the lessons and experiences I have yet to learn.