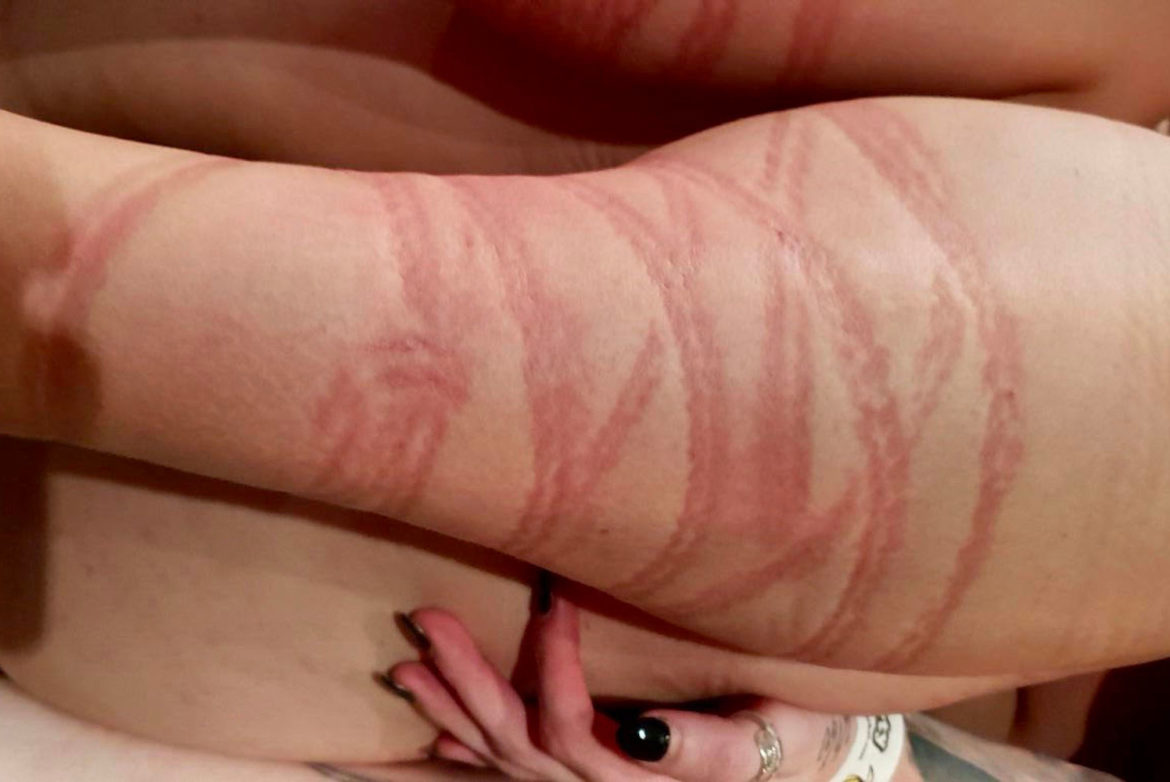 I had put my new little black dress and pretty lace underwear on, perhaps a little overdressed but I was excited to see Mistress again and without any idea of what to expect.

I met Mistress and her friends outside, I’m still constantly surprised at how friendly everyone is and how easy they are to talk to. Mistress immediately put my collar around my neck and a smile crept onto my face knowing that I was wearing Her collar and she wanted people to know I’m Her little rabbit.

It didn’t take long for a new toy to be bought… an electric cane! Is there no limit to torturous inventions? My only peace was that an electric cable would be needed so perhaps I would escape that cane for now.

Once finished smoking we made our way upstairs to relax and eat. They ordered but typically I was already too turned on to eat, sitting (secretly without underwear) next to my beautiful Mistress. The delay in drinks and food left plenty of time for Mistress and Her friend to leave lots of pretty mini cane marks over my naked thighs. I was pinned on the sofa by Her strength and left squirming as more toys were tested out each adding their individual mark to the red picture. The flicking didn’t relent on the arrival of the food, there was simply a few more breaks between the sharp flicks which left the perfect amount of time for delicate red marks to appear and a perfect pattern to form. I’m starting to think I might talk too much, perhaps it’s the offers to sew my mouth shut or the chilli placed on my tongue whilst the Doms ate. My mouth remained hot and closed as I waited for permission to swallow, but I was in rush, there wasn’t any pain and it gave me plenty of time to admire Mistress and appreciate sitting next to Her and amongst Her friends.

All week She had mentioned caning, cold caning specifically and even asked on the day whether I could be marked (I can’t have bottom marks if I’m competing). This meant when we stopped in the Shibari room I was a little confused and started to get nervous. I’d never played with rope before and had no idea what it would feel like, Mistress requested the coconut rope and a “Guatemalan” which I didn’t understand… rope is just rope, right? I found myself plaiting my hair from the nerves and only after I removed the plait was I told my hair needed to be up. Mistress questioned why I was still dressed and after being pulled around and finally to my knees by my hair I removed the black dress, becoming aware of the room being filled with people who could now see my scar covered body. I knelt at Her feet, looking up at my Mistress’ elegant body, allowing myself to be vulnerable and controlled. Freedom is not something I desire when in Her presence.

I was then instructed to sit and my arms were sharply pulled behind my back, I was vulnerable in every sense of the word and with no clue as to what was planned. They seemed to be an ominous atmosphere as coconut rope was laid out, one for Mistress and one for Her friend. He started. Then burn started, first at my ankles, a sharpness like a blunted knife being pressed into skin, Mistress followed His lead tying the rope round my ankle as I attempted not to squirm. It wasn’t so bad, a roughness similar to sandpaper being dragged along the skin. The Dom restraining me laughed and made it clear that it would get far worse. As They both started to pull the rope tight with dexterity and wrapping it around my legs the screams started. At first I managed to keep most of the pain inside, watching Mistress’s alluring smile grow as my evident affliction increased, but after the rope started crossing and the pressure on my shins grew the pain became insufferable. The blunted knife sensation transformed by the second till I may aswell have had my legs wrapped in barbed wire. I had no choice but to remain still and surrender to her relentless sadistic nature, my arms were pulled tight behind me and a fist in my spine kept me unable to move as I felt the adrenaline course through my body. I tried kicking out and wiggling but it was pointless, I was powerless and merely increasing the sweat that had now coated my body. All thoughts had long left my head as the pain flooded through my every nerve. My hands grabbed at whatever they could but the burning did not relent and Mistress’s smile only grew with my screams.

Once happy with Their rope work I was hooked up and the They slowly pulled until I was suspended by the Death spiral and my shoulders were all that remained resting on the floor. The suspension itself was different to how I imagined, the pain was numbing and relaxing. I could finally stop screaming and enjoy the burning, appreciate the strength of rope and skin, disappear into a pain meditation and relax with a silent mind.

It felt like hours suspended but I doubt it was for more than a few minutes, Mistress and Her friend finally lowered my legs and then i was reminded of the pain as the sharp rope was tightly unwound from my legs. My screams quickly returned as He pulled tighter before releasing, Mistress was a little more gentle but the agonising torment was not. With one leg free but being “massaged” with hard wood I squirmed uncontrollably, twisting and using any strength I had left in my body. The hard wood running along sensitive skin was almost unendurable. The adrenaline had taken over and even with three powerful people I managed to move, pointlessly to the side and take a second to breath with no new sensation.

I was a mess, sweat covered, mascara dripping and indented red marks covering my lower legs. A tiredness overcame me as I awoke to the world, noticing the people who had patiently sat watching and enjoying my screams. I wanted Mistress and she kindly sat allowing me to rest head in Her lap and curl into a ball, vulnerable but safe. I didn’t mean to be rude when one of the men touched me, it’s not that I didn’t appreciate Him restraining me so that Mistress could create art, I just couldn’t bear to be touched by a man whilst my little brain was trying to comprehend what had happened. I was grateful to feel Mistress’s sharp nails gently on my skin. I don’t remember hearing anything but Her soft skin was comforting and kept the silence as the adrenaline started to drop. “Silent but not really silent, like a page being turned in a book, or a pause in a walk in the woods.”

As I rejoined the world, the rope was packed away and it was time to move to the bar. I jumped up, smiling and happy to be with such amazing people, ready to continue enjoying the night! The burning never really left all night as I walked around barefoot trying not to knock my shins and cause unnecessary pain. Drinks started flowing before long, I was given my first slutty dance lesson and a beautiful slutty lap dance (whilst I rested on my knees at Mistress’ feet). Everything was back to being relaxed and I doubt even a good Wolf slap would have wiped the smile from my face. I was able to listen to experienced Doms as they discussed all things kink and dark made only better by being allowed to lie again with my head on Mistress’ lap looking up at her radiant face and glistening evil eyes. I love learning about everything any anything I don’t already know, it’s one of my favourite things and I was very privileged to be amongst such amazingly knowledgeable people who answered my questions with a smile. The night sadly came to an end as all great evenings do but I was content and honoured to still be wearing Mistress’ collar and She has made plans to use me as target practice so the next adventure won’t be far away!