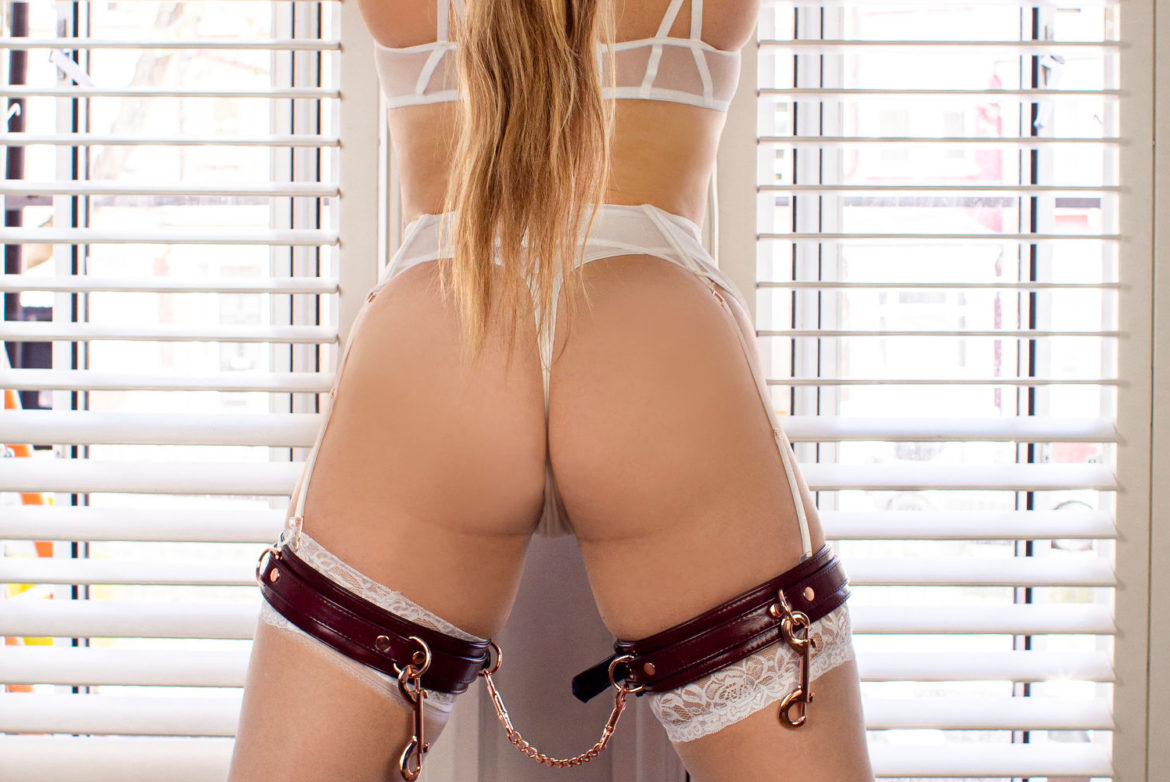 I’d wanted to play for a while and I’d mentioned to Mistress that I wanted to cry, the last few weeks have been crazy and I can’t help but feel that all the emotions are hiding inside me, exhausting me. The problem is I wasn’t sure if I could cry from pain but I know I wanted Mistress to be the one to make me if it was possible. I’m not sure what set my nerves more on edge, knowing I’d asked for the beating and was starting to come to terms with my masochism, that Mistress had a lot of stress to relieve or that it would be filmed. I could feel the blood pumping and my senses heightening as I mustered up all the calm I could and greeted Mistress at the door to Her beautiful palace of kink that is Alchemy Rooms.

To no assistance of my developing nerves I spent the first hour watching Mistress toy with an cute little sub. Watching his back muscles elegantly contract and the whimpers release from his latex adorned face. I say I watched him, in reality I spent the hour studying the mesmerizing second skin that tightened and wrapped around Her stunning body, highlighting the curves leaving my pantsuit wet with desire to touch. I find more and more often I realise quite how lucky I am. To be in the dungeon of a Queen awaiting my turn to be played with and a chance to show Her my obedience and how much I appreciate Her time.

Once the pretty boy had left (not before attempting to brag about his dick size) the ever familiar but reassuring butterfly sensation flooded through my body. The camera and lights were set up and ready, Mistress had dressed me in one of Her lingerie pieces and the equipment was laid out in a tormenting fashion. I love being Her doll to dress and undress as She desires, making sure I am exactly how She wants. Her precious rabbit.

Mistress directed me where to kneel, I would be on my knees facing Her throne, mask on and cheeks bare. I adored the first few seconds, being allowed to gaze up at Her beauty, how even the most intricate of thrones we’re deeply overshadowed by Her. Mistress’s seductively powerful laugh echoed as She landed the first slap, then again and again and again. The burn deepened within my left cheek only to be outdone by my desperation for Her to touch me. Being on my knees for this sadistically magnificent woman, being Her toy to play with and entertain… does it get any more perfect? Mistress’s hand ran down my body, one inch at a time until she had my swollen cunt firmly in Her fist, smiling and rubbing Herself against me as the wetness grew. My hand slid to Her leg, for support, for reassurance, just to be touching Her. I wanted nothing more than to be close and feel the warmth of Mistress, the cost was irrelevant, any price I was willing to pay to feel Her soft cheeks glide against mine and relax into the knowledge that I am Her pretty little plaything, Her precious.

The slaps grew grew harder correlating to my struggle to remain still. I could feel Mistress’s sadism grow as I struggled to hold myself still at Her disposal. My hands gripped Her legs for dear life only relaxing for the brief moments where I could lose myself in Her skin touching mine softly, rubbing on the newborn heat and forced flush, moments that ended too soon by the impending slapping.

The final slap was cold, hard and clear. My face which resembled that of a deer in headlights was knocked to the side by Her perfectly manicured hand with no remorse as the sting raged through my right cheek to the tube of Mistress’ laugh. As always, Mistress’ intuition was perfect and a delicately seductive red kiss to the rabbit leather of my mask had me lost in the moment of ecstasy, a beautifully bright reminder that I had been a good rabbit as I felt the one piece soak in my arousal.

She wasn’t done, merely warmed up. The heat still dominated my senses but the nerves swiftly returned leaving me in a static of frantic arousal awaiting what I could only assume to be a brutal caning. For someone so kind and happy, Mistress has an incredibly sadistic streak. Wiggling against the cold leather I slowly became immobilised, one strap at a time all the while squirming yet mesmerized by the equisite Mistress and the powerful aura radiating off Her.

Some may consider it bratty, I prefer playful, either way as soon as my hands were tightly cuffed I found myself eager to show Mistress how I could relieve my wrists. Some ridiculous notion that fluttered through my cortex that thought it would entertain Her. Said notion was rapidly dispersed by sharp pinches shocking various soft skin around my body and those naughty wrists being uncomfortable strapped down. I watched as that familiar enticing smile picked out various viscous instruments, lining them up on Her throne taunting my every thought. Much to my own embarrassment I started to worry, the begging swiftly ensued fuelled by my dibilitated state and the worry that I wouldn’t make Her proud. What I was weak or gave up on camera, what if I ruined the clip She wanted. So many concerns came running through my mind, sabotaging any pleasure.

“Do you not trust me”. It’s strange how such a simple question can completely change a mood. It became simple. No concerns, no space for worries. I trust Her. Nothing else mattered.

Then it came, the unrelenting monochrome of pain. The whip catching my calf releasing little screams of discomfort then the full force of a Goddess behind me with a simple black cane forcing my body to bounce and yet no movement. I fought myself to remain still and relax, to give into Mistress’s will and just accept the encapsulating sensations as I felt my skin tenderise and rip. One would almost think Mistress liked the reaction, each time I successfully took a few the intensity and power became exponential. Amidst the screams and growls of pure torture balanced by Mistress’s favourite song playing and Her ruthless laughter, I somehow freed my hands in what can only be described as a hulk like moment. More begs squeezed their way out in cry’s, my newly freed hands found themselves trying to cover whatever they could reach only to be curtailed by a swift strike to the palm. It was futile. I was completely powerless. The punishing blows continued to land one after the other and all I could do is gaze up at Her beauty and She counted the rounds of 6 begging 6 to only be 4 numbers and yet it seemed to 7 or 8 most times. Mistress taunted me with my previous request, Her misleading gentle hands caressing my skin reassuring me whilst alerting me of my newly mutilated skin.

When I thought my screams would become exhausted, when I found myself begging for Mistress’s exhaustion and yet it didn’t come. Only Her happiness at how She had drawn blood from my stubborn horse riding bottom. She wanted Her rabbit to cry a river and yet knowing how many could be watching I couldn’t seem to allow the break. My fastening whimpers drew Her attention, even with the mask Mistress could see the few tests that were no longer mine, no longer in my control. They ran down my cheek for Mistress and a strange sense of comfort flooded my shaking body. Mistress should never have to compromise and I only hope one day I’ll be brave enough to have Her break me. To be the first to break me with pain.

Drained and content I lie there only just about hearing Mistress tell me to come to Her. I wanted nothing more than to feel Her and be held by Her. I craved being able to please Mistress, my arousal only growing by the second as I found myself naturally crawling to Her, being drawn to Her. Lying there being held was worth every second of pain and every scream Wandering in my Mistress induced delirium for what felt an eternity.

Gently I found myself lying at Mistress’s feet with doxy in hand as instructed. The strong unrelenting vibrations rubbing against my swollen clit whilst I reminisced of my fortune. Not only being allowed a nice O but to do so whilst being allowed to admire Her powerful legs wrapped in latex, occasionally being able to angle myself such that I could look up at my Queen and be greeted by an innocently misleading smile. Lost in the moment my hand lunged for Mistress’ calf as I climaxed, only to destroy my own release by pressing the wrong button. To say this amused Mistress would be an understatement.

Not wanting to waste the opportunity, the doxy found its way back to the throbbing between my thighs. I felt bolder this time, less of the blanket covered me and I found myself locked onto Mistress. It barely took a minute before the convulsions started, my noises grew and I lost control of the moment,the intense contractions ran through my body and right as the climax started I found myself moaning for Mistress, needing to be Her slutty rabbit. Craving Her touch, lips, kiss, voice. Falling into the euphoria and finding myself kneeling at Her feet with my head resting on Mistress’s soft lap enjoying the enhanced delirium as She toyed with my hair, reminding me I was safe with Her and I enjoyed being completely vulnerable for Her.

Once happy with Her exhausted art, I was allowed to help remove Her boots, feel Her sweaty feet as they soaked my shoulder and breasts and yet oddly only felt adoration for being at Her feet. I found myself comfortably locked in Her cage watching her beautiful figure walk away until morning. My only remaining thought of hope that She enjoyed playing with me.